Chairman’s  Announcements: Condolences had been passed on to the family of Dave Chandler.
Adderbury Lakes continued to be closed and risk assessments would be completed before they were re-opened.
WARA:  The PC wanted to express its disappointment that a small group of residents calling themselves ‘West Adderbury Residents Association’ were spreading a lot of ‘fake news’ relating to the PC to further their own agenda to split the village of Adderbury.  If residents heard or received information regarding the PC and its workings which caused them any concern at all, please contact the Clerk for clarification and a factual response.  The PC would be pleased to hear from you
Biodiversity Project:  Two residents were now involved with the area of land in St Mary’s Road
Gracewell Carehome:  There was a proposed residential development at the site.
Adderbury and Milton Feoffees – Terms of Office end in May 2021 for Councillor Jelfs and January 2022 for Paddy Leeman.
Bryan Sheppard Memorial Tree: The tree was due to be planted in August 2020.
Reports from County and District Councillors: There was a verbal report from DC Andrew McHugh.

Milton Road Project: The report was noted, the Sports Turf Research Institution report was noted, the Chairman and Clerk were authorised to continue progression of the pitch area, working with D W Clark (the company appointed by APC) and continue the management of the land and the Chairman, Clerk and Vice chairman were authorised to continue working with the WFAC residents team to progress Phase 2 of the project.

Regarding Planning Application 20/01208/F – Land West of Horn Hill Road, the PC did not object to the application.  However the development should not impose on the Friends Meeting House.

Traffic Calming: The report on Traffic Calming was noted.  There had been slight delays with the proposals due to the Covid-19 Pandemic and a subsequent shortage of staff at the CC and the Adderbury Speedwatch had been paused also due to the Pandemic.

FOCAL:  The report was noted.

WFAC:  Fundraising events were not able to be held at the current time but it was hoped that they may be able to begin again later in the year.  In the meantime there was a small regular income from Easyfundraising and sales of Cherwell Lottery ticket.  A leaflet from WFAC would be delivered to all households over the next few weeks giving positive information on the Governance Review and updating villagers on how the sports and community project was progressing. WFAC thanked APC for their very generous grant of £500 which would be used to help promote the project and maintain the WFAC website.  A grant of £100 had also been made by Adderbury Farmers Market for which WFAC were very grateful.

Adderbury Lakes:  The Lakes Management Committee continued to follow up the survey and progresses with this work and they thanked Committee members, especially Rick Atkinson and Nigel Claxton for their work at the Lakes.  Following the issues caused by natural toxins released into the lakes in the very hot weather last summer the PC commissioned a report from Vaughn Lewis, Windrush Aquatic Environmental Consultancy.  The Lakes Management group have followed up some aspects of this report and are currently looking at the problem of weed growth, including applying for a grant to help pay for any action to be taken.  The PC authorised the Clerk and Councillor Rye to accept a suitable quote for the removal of the fallen tree at the Lakes, noting that the work needed to be completed in the next 4 – 6 weeks.

Community Governance Review:  It was noted that the CGR had been submitted to CDC.  The PC does not support the proposal for a West Adderbury Parish Council and the Clerk, Chairman and Vice Chairman were authorised to submit comments to CDC on behalf of the pc opposing such a split in the village.  A statement and leaflet would be put on the PC website/village website/ Facebook etc and circulated in the village to state and explain the PC’s agreed position on the CGR.

Millennium Cup 2020:  This would be awarded in 2020 if there was a Councillor able to complete the judging.

Vacancies:  Ian Bailey and Oliver Ighani were both co-opted onto the PC.

Environment Committee:  The EC minutes from the meeting held on 23 June would be considered at the next meeting.

Next Meeting:  The next meeting would be held on 28 July in Church House at 7.30 pm unless stated otherwise. 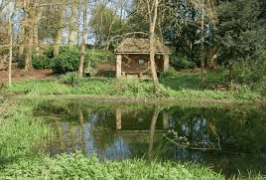 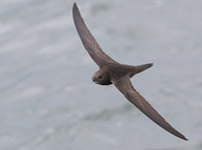 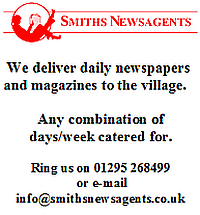